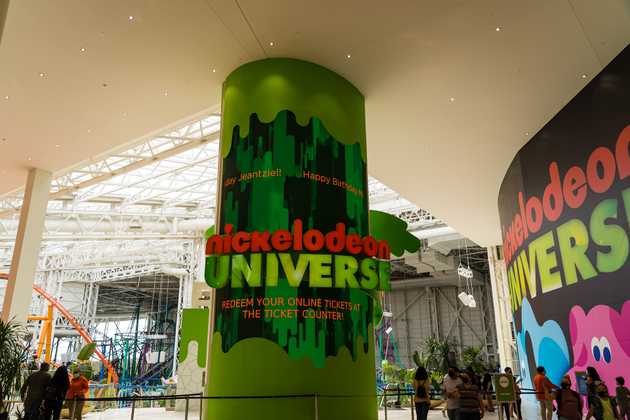 Like any self-respecting coaster enthusiast, I try to keep up to date on new park construction and so of course, I watched Nickelodeon Universe at American Dream intently as it was being built. When it opened, I figured I’d hold off until all of the coasters were operating but then, of course, the pandemic hit and the mall remained close for about 6 months. When it finally reopened with all of its rides, it was near the top of my list. I originally had a trip scheduled out in February but decided that Nick U couldn’t sustain an entire trip by itself, so instead I decided to reschedule it for May where I could (hopefully) combo it with the opening of Jersey Devil at Six Flags Great Adventure. Obviously, as time went along it was more and more apparent that Jersey Devil wouldn’t be open but the trip would go on as there was some troubling news with American Dream suffering financially (as you’d expect with a mall during a global pandemic) and having to forfeit a stake in the Mall of America that they’d used as collateral to secure a loan. Fear of the mall closing forced me to keep this trip even though I found out the Slime Streak wouldn’t be open the day I was at the park. 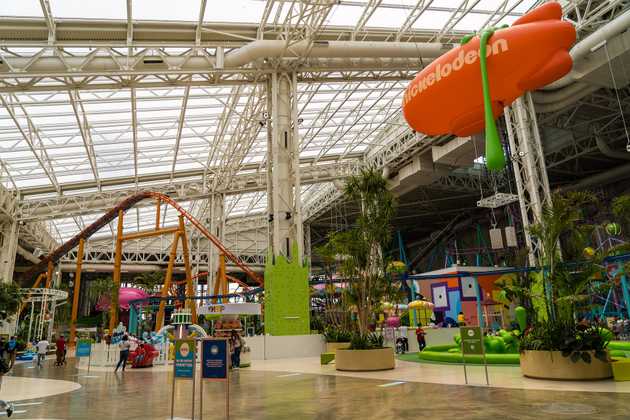 I decided to fit my day at the mall into an afternoon before my flight back to the west coast left. Due to the pandemic(?) the park is selling 4 hour slots at the mall and my schedule perfectly suited the 11am-3pm slot. I showed up at the mall at around 11:15am and was surprised how quiet the parking lot was. After walking through the mall and taking a peek at some of the other amenities offered (most notably the Dreamworks water park), I headed into the Nickelodeon Universe park. My first impression: cool to see all that Gerstlauer track against the back wall! But otherwise, a little lifeless and warehouse looking. I think just taking the walls and putting murals on them would go a long way. But regardless, it was time to ride! I grabbed a locker and went looking for my first ride. After heading to Shellraiser to see if it was running (and figuring out that it wasn’t running yet) I walked over to Shredder to start the day on this Gerstlauer spinner. 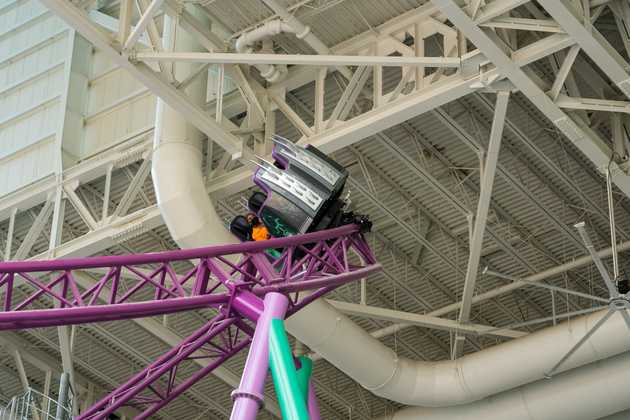 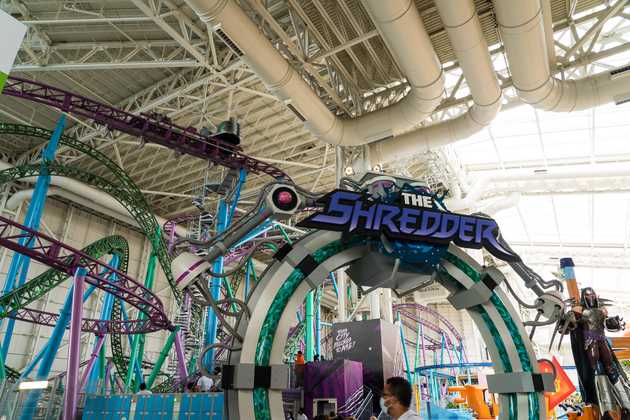 I don’t like spinning. I skip any and all flat rides featuring spinning and only like spinning coasters if they don’t really spin that much. To my dismay Shredder turned out to be one that did spin a bunch. As such I wasn’t really a fan of it. But other than the spinning I did think that it was an extremely cool coaster. It featured a lot of the standard Gerstlauer spinner elements but also featured some more wild mouse-esque pieces. The fact that it intertwined with Shellraiser was also exceptionally cool. 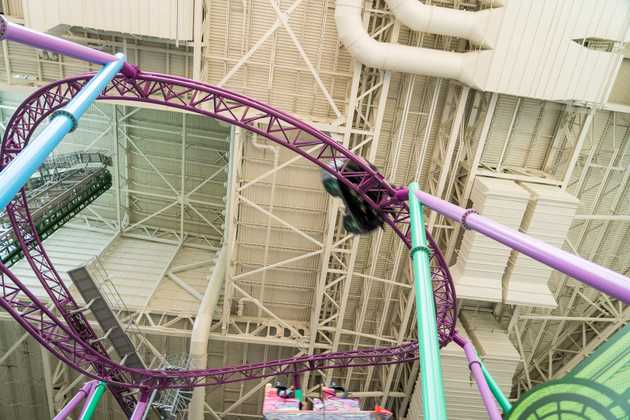 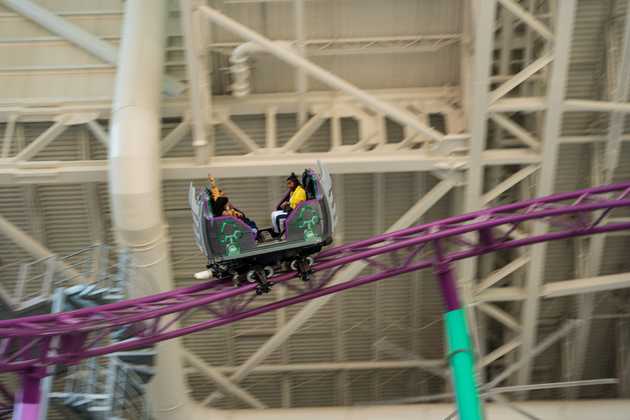 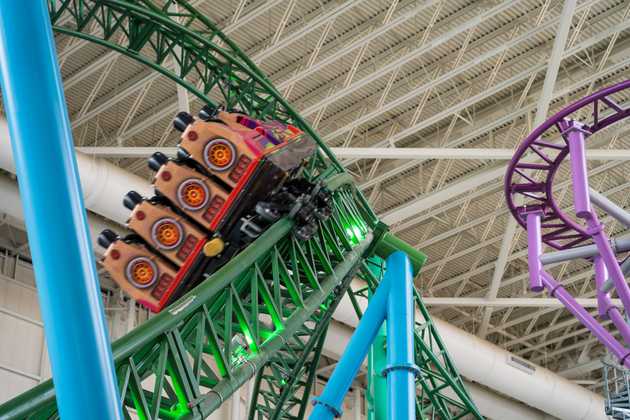 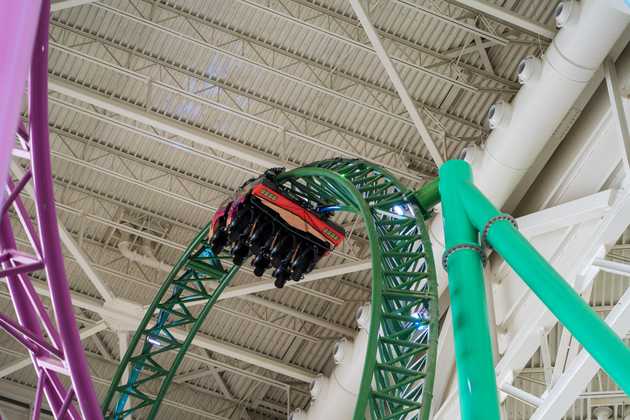 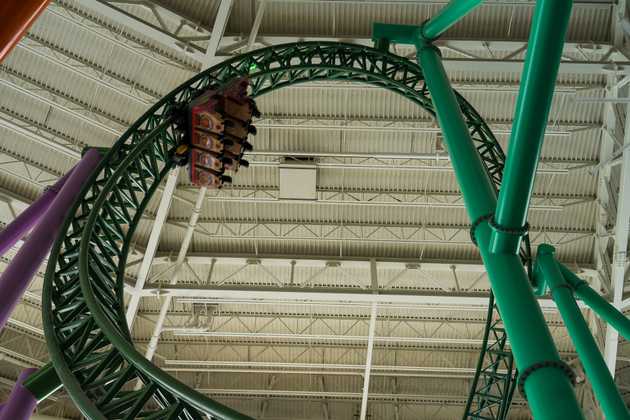 While I was riding Shredder, I saw Shellraiser running. After taking a quick peek at whether the other coasters were running (they weren’t) it was time for the park’s signature ride: TMNT Shellraiser! Let’s start with some good: the launch was surprisingly great. Really forceful for such a small coaster train. The inversions also had some fantastic hangtime and were really big looking since they got so close to the roof of the mall. The lift also was a standout point with the long delay at the top to view the NYC skyline. The drop wasn’t as great as some other beyond vertical drops but was still a lot of fun. The only bad part of the ride was the unbearable rattle. I’m not usually one to complain about the rattling of a ride but in this case the rattling was pretty painful and pretty unavoidable. It was most noticeable at the bottom of valleys and going up inversions. It’s kinda crazy that such a new ride has such a bad rattle. This “feature” of the ride ruined it in my book and I don’t really ever care to ride it again. 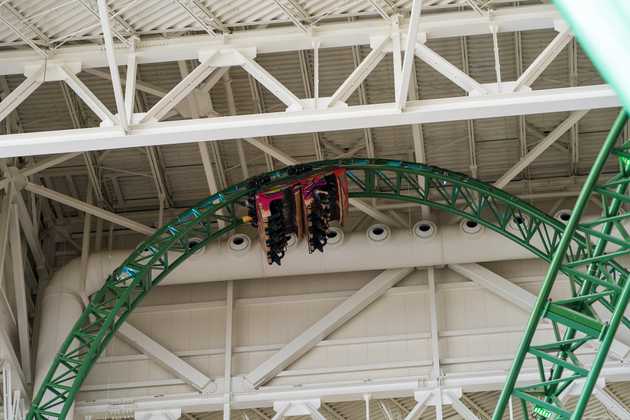 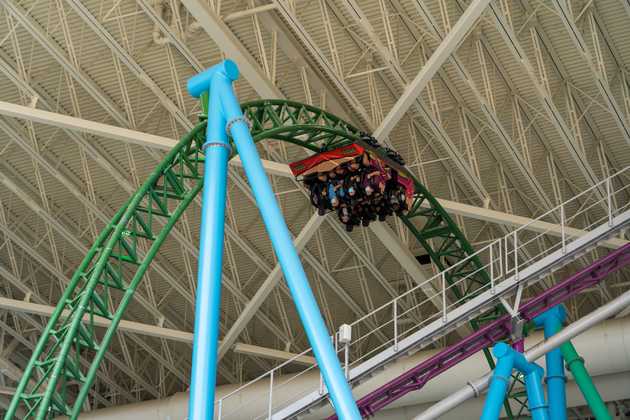 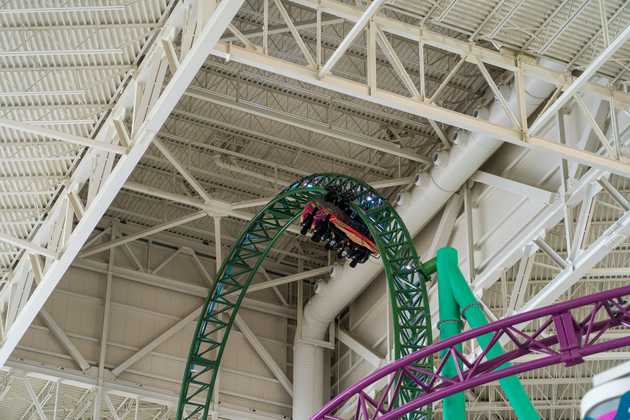 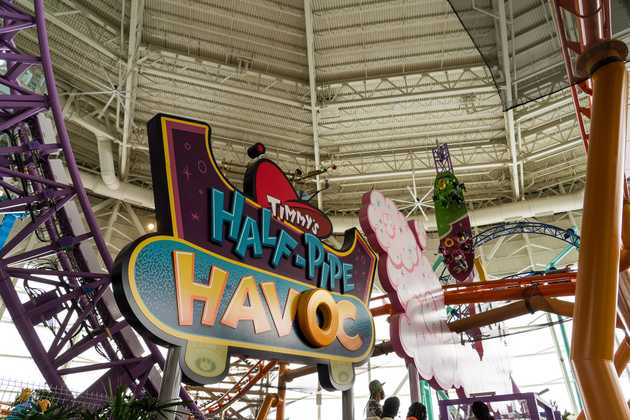 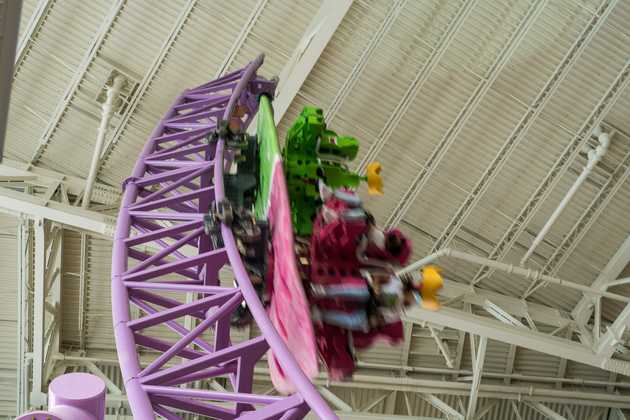 After lunch I saw that Timmy’s Half-pipe Havoc was finally open to guests so I hopped in line. Every time I ride one of these little Intamin halfpipes I’m always impressed. The airtime going up and down the spikes is extremely cool and I like just how close you get to the end of the spike in both directions. Overall it’s a really fun ride but not really one I’m dying to ride again. 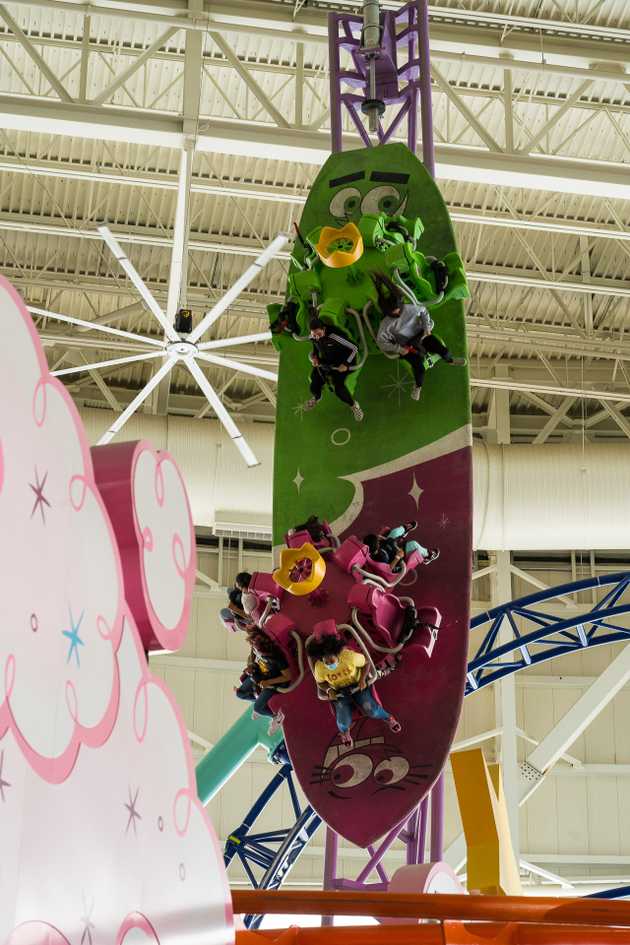 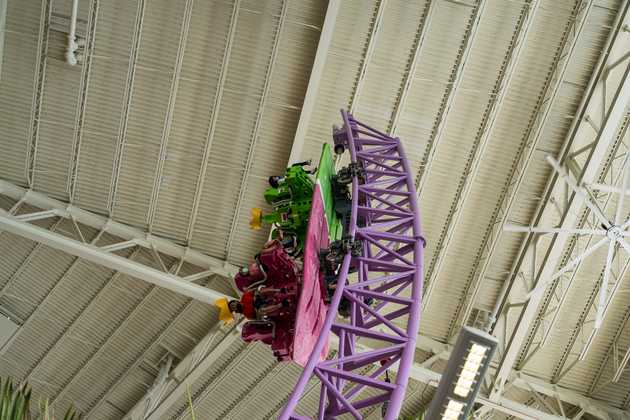 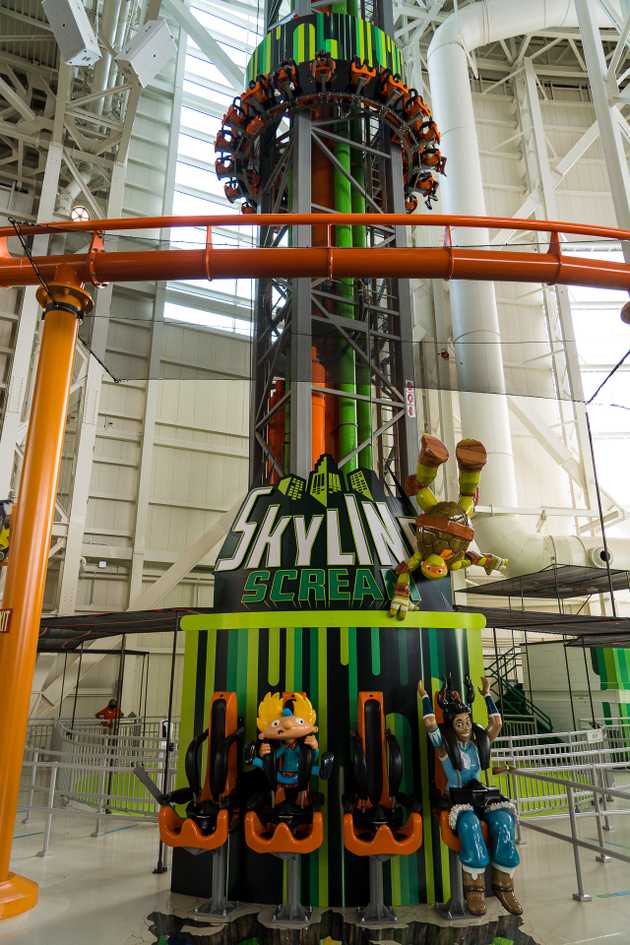 After checking on Sandy again I gave up and decided to ride the one flat ride in the park that I was really wanting to ride: Skyline Scream. I thought that the ride program was pretty disappointing for a drop tower. I didn’t really get that stomach in your throat feeling that I was really looking for in a drop tower, instead it was a more gentle floaty drop. But as far as what this ride does right: that view at the top! I unfortunately didn’t take the NYC side but I could see it turning my head and wow, that’s really cool! Also cool is the fact that there’s a decently sized drop tower indoors. Don’t see that many places!

At that point I hadn’t seen Sandy’s test at all and I was just about ready to chalk it up as an L so I figured I’d get my camera and get some pictures.

After wandering around for 30 minutes or so, I finally saw it test a couple of times and open its queue. I was on the first train of the day! 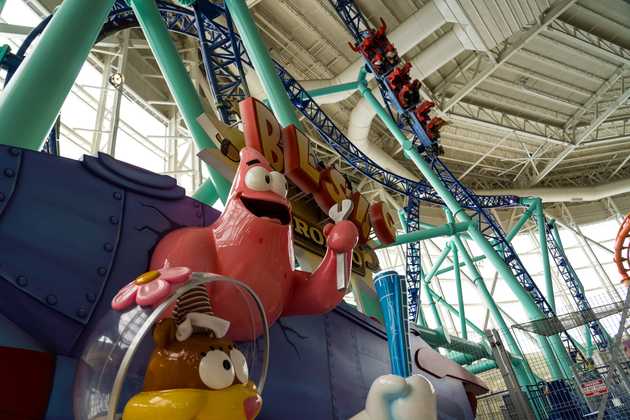 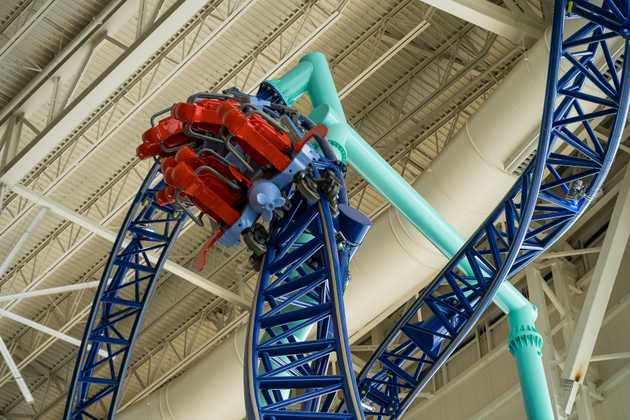 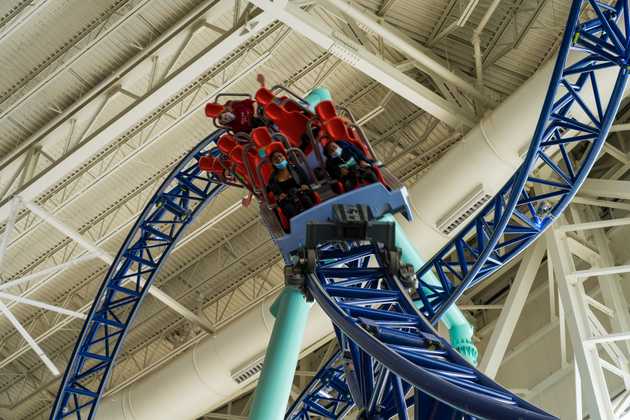 What a crazy little ride! The inversions are disorienting and the fact that you get to do the course in two directions is just amazing. But the best part of the ride is by far the launch. I was expecting a slower launch, maybe a little more Mack than Intamin but these launches were punchy, just like Shellraiser. Overall it was a really cool coaster that I hope is seen in more places. The only complaint I have with it is the fact that it also had a little rattle in it. Not nearly as bad as Shellraiser and not bad enough to make the ride not fun but definitely noticeable. 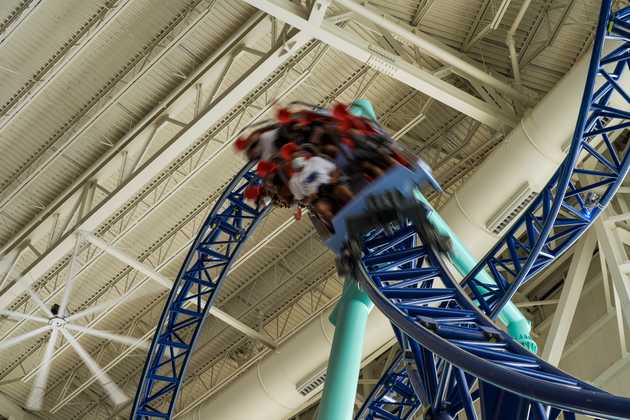 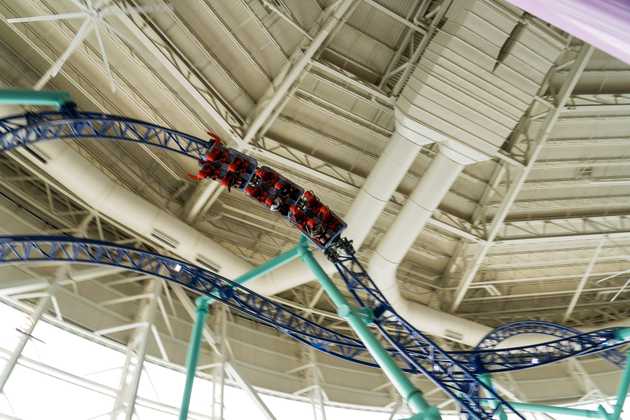 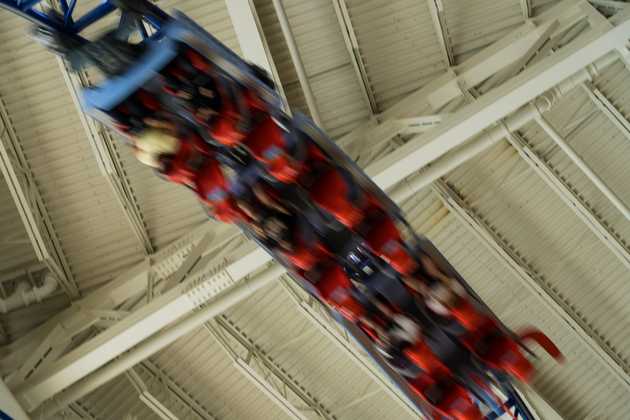 After riding Sandy and getting some shots of it, it was time for me to head out to go catch my plane. After spending some time around the park I was a lot more pleased with it than when I walked in. Although the park doesn’t have a ton of atmosphere at first glance, I still really enjoyed the characters and bright signage used throughout the park. In normal times, I assume that there will be more meetups and costumed characters which will also add a lot more energy to the park. My major gripe with the park lies squarely with the price. I paid $85 for my 4 hour slot. I know that capacity is limited and the mall is looking to make money via the landmark attraction to the mall but $85 for 4 hours was a bitter pill to swallow for me. I still need the Slime Streak credit but don’t think I’d go again if I had to pay $85 for the visit. I’ll be back once they move to a pay per ride!